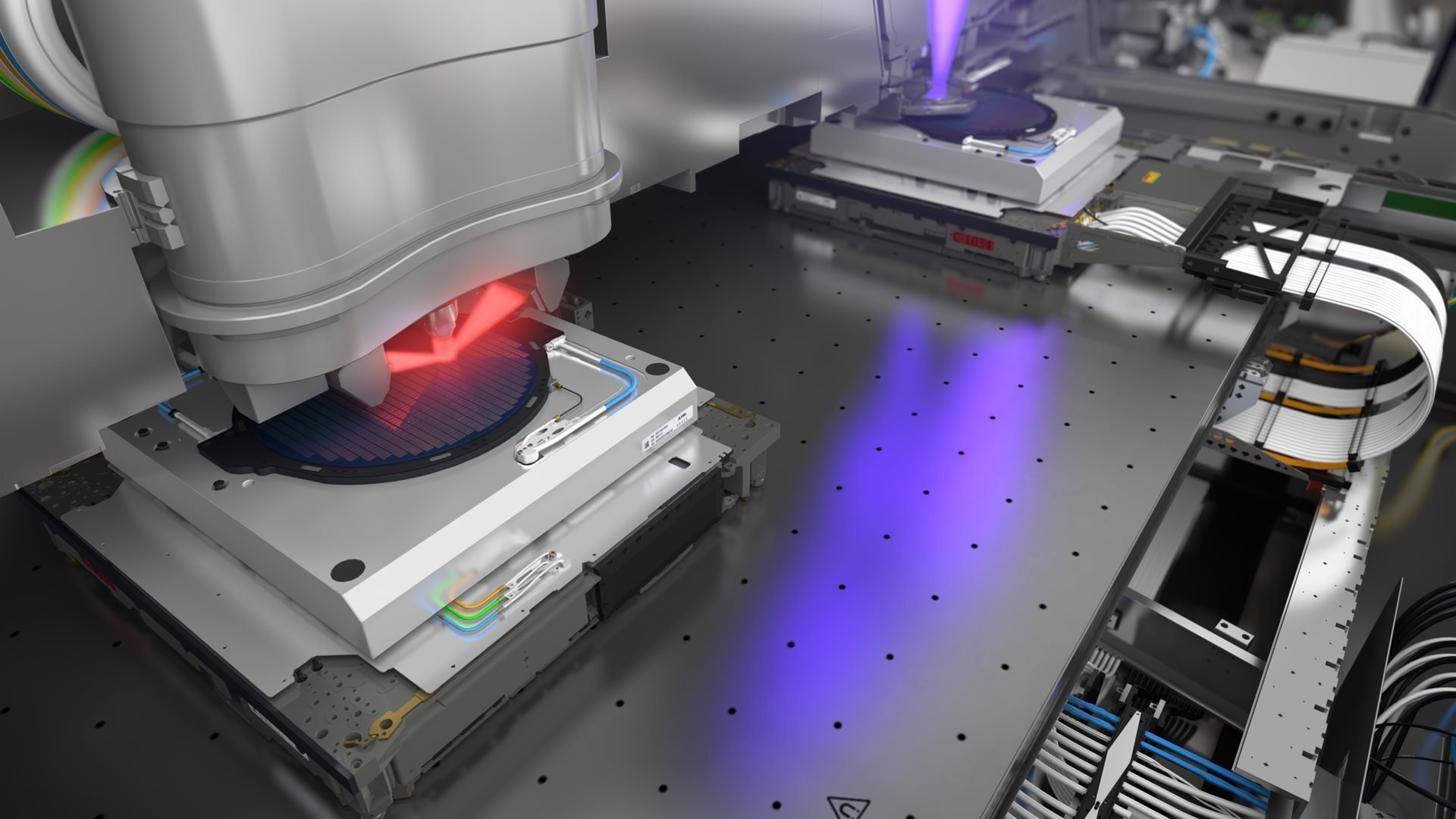 The accuracy of every element of the lithography process is rigorously assessed. Because even the smallest errors can result in a defect chip

Chipmakers use our products to print chip patterns and inspect those patterns using advanced metrology systems and software, allowing them to increase accuracy and yield.

Types of metrology and inspection


There are two ways to examine the quality of the printed features on a chip: diffraction-based optical measurement and e-beam inspection.


Diffraction examines how light reflects from the wafer, while e-beam observes how electrons scatter when they come into contact with the wafer.

ASML uses both: our YieldStar systems use diffraction-based measuring to assess the pattern quality on the wafer, and HMI e-beam inspection systems help locate and analyze individual chip defects.


Combined with sensor-based information from inside our lithography machines and a complex set of software algorithms, the YieldStar and HMI systems provide a wealth of data that chipmakers use to optimize their manufacturing process.


ASML's YieldStar systems do just what their name suggests: they help our customers increase their yield, or the proportion of functioning chips on the wafer. YieldStar allows manufacturers to track key production parameters such as overlay (the accuracy with which two layers of a chip are aligned). Our YieldStar systems are usually integrated into the production line so that they can measure quickly and accurately, looping the data back to the lithography system for real-time corrections to the manufacturing process. 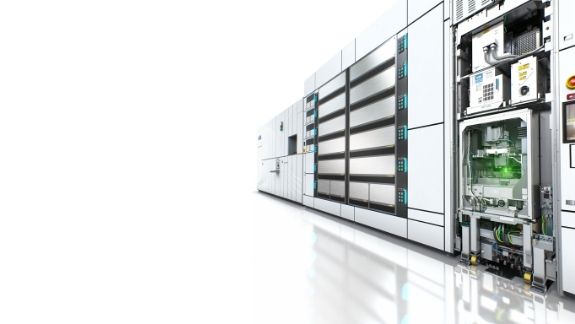 YieldStar is a diffraction-based optical metrology system which applies the simple fact that an object’s shape determines how light reflects from it. For example, shine a beam of light onto a repeating pattern of lines on a wafer, and you can easily predict what the resulting pattern of scattered light should look like. If you collect the scattered light using a high-resolution digital camera, you can quickly determine how well the prediction matches reality and thus how well the pattern of lines has been printed.

In wafer metrology, key manufacturing parameters such as overlay (the accuracy with which two layers of a chip are aligned) and focus (how sharp the image is) are monitored by measuring how well a particular repeating pattern (the ‘metrology target’) is printed on the wafer. These measurements are made at marked locations across the wafer.


Integrated into the production line

Prior to YieldStar, wafers were taken out of the production line to be measured manually. By integrating our solution into the production line (or ‘track’), chipmakers can now use YieldStar to gather their metrology data quickly and accurately, offering better control over their production processes. Metrology data is analyzed using control software and fed back to the lithography system in real-time, enabling customers to tune the manufacturing process further for optimal yield.


From repeating patterns to real structures

Our latest developments in diffraction-based metrology feature new optics technologies to generate more accurate data, faster, measuring thousands of data points for each batch of wafers. YieldStar matches the productivity of our lithography systems for wafer-to-wafer control on the most advanced chip nodes. Additionally, YieldStar is used for after-etch metrology to inspect actual device structures with more accuracy and higher measuring speeds than our competitors’ scanning electron microscope (SEM) solutions.


For today’s advanced microchips, defects as small as a couple of nanometers can render the entire chip useless. With its 1-nanometer resolution, e-beam inspection offers just the right kind of eyes to spot those tiny misprints.


ASML is at the forefront of developments in e-beam metrology and inspection. E-beam achieves a higher resolution than YieldStar, but it measures more slowly, which means that it’s typically used after the pattern is etched onto the wafer. 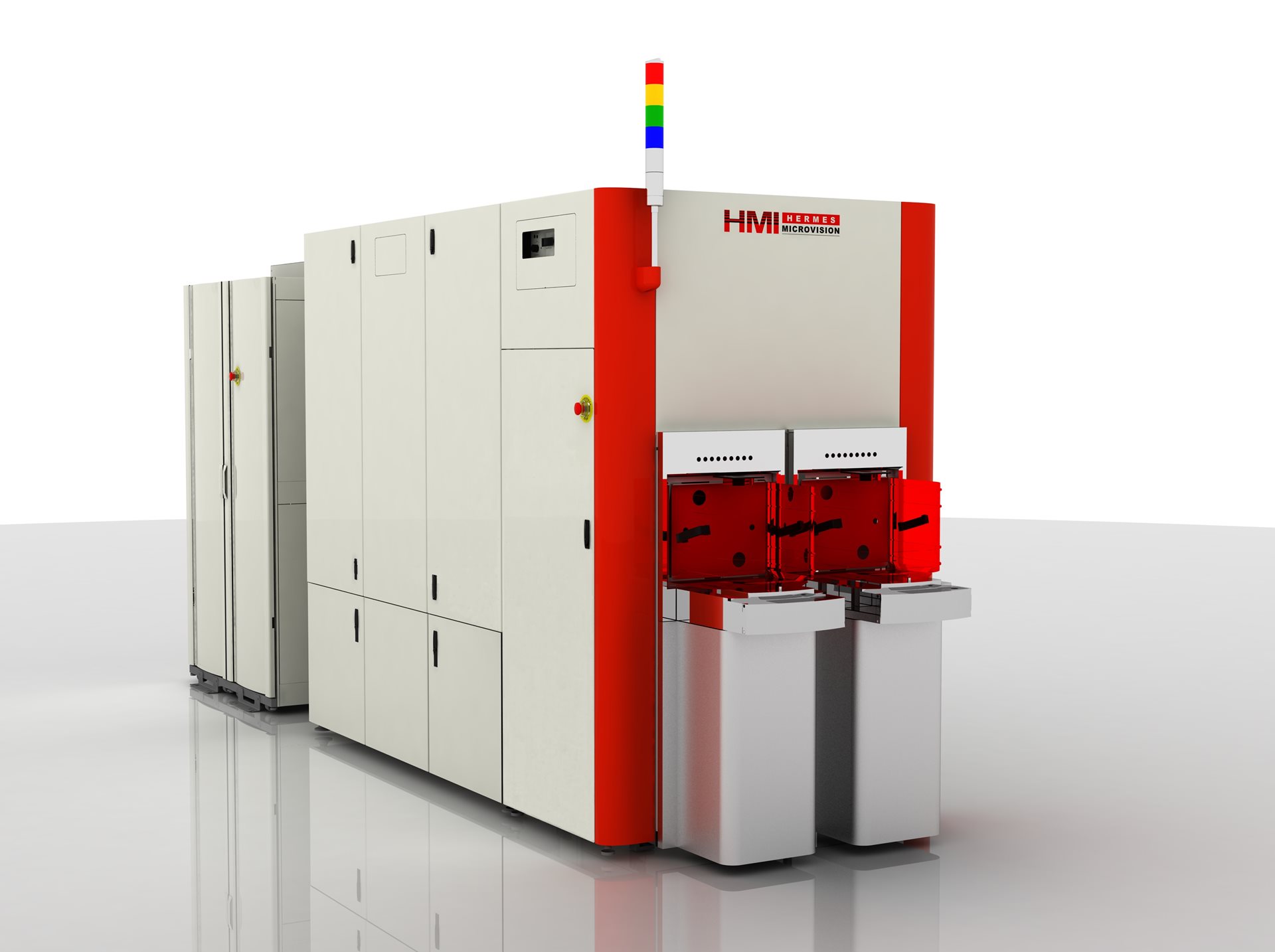 E-beam technology has been around for decades. The basic concept is that a metal wire is heated until it gives off electrons, which are accelerated and formed into a beam by electric and magnetic fields. Unlike visible and ultraviolet light (but just like extreme ultraviolet light) electron beams must travel in a vacuum so they are not deflected or absorbed before reaching the target.


In metrology and inspection in the semiconductor industry, the e-beam scans across the wafer. The electrons strike the surface and penetrate a small distance into the material, generating new 'secondary electrons' before being scattered. Just as with diffraction-based measurements, measuring the scattering of secondary electrons allows us to build up a very high-resolution picture of the surface. The more focused the beam, the smaller the details that can be measured.

The tricky thing with e-beam measurements is that they’re quite slow. As a result, they have only typically been used in the early R&D phase of chip manufacturing, where time is less of an issue.


ASML is leading the way in speeding up e-beam measurements so that manufacturers can enjoy their benefits in volume production. One way we do that is by developing solutions that focus e-beam measurements on specific hotspots where defects are more likely or more critical.


The HMI eScan 1000 uses multiple e-beams to inspect a greater surface area of the wafer faster. First shipped to customers in May, 2020,  the eScan 1000 is a 3x3 multibeam system that can increase throughput by around a factor of nine. But we don't intend to stop there – we plan to increase the number of beams and beam resolution for future generations to align with chipmakers’ product roadmap requirements.

By speeding up the process and narrowing down the search to specific areas, e-beam can be used directly in the production line for wafer inspection while maintaining productivity levels.

Precision and speed are paramount for today’s advanced chipmaking machines. But sub-nanometer inaccuracies inevitably creep in due to material imperfections, temperature fluctuations and atmospheric pressure changes. Scanner metrology software uses computational models of machine processes in machines to predict and coordinate how the powerful mechatronic modules within our lithography systems should behave to compensate for physical imperfections and maximize system performance.

A lithography system (scanner) must work 24/7 with sub-nanometer precision, while accelerating mechatronic modules at incredible speeds. For example, the reticle stage accelerates at close to 16g and the wafer stage to 7g. That’s more acceleration than a jet fighter.


It’s not possible to mechanically construct a machine capable of this level of alignment and precision, accelerating at those speeds, and with the level of reliability and repeatability required to make today’s computer chips without the help of in-scanner metrology.

Lithography systems are the most ‘tweakable’ tool in the chipmaking process. There are a multitude of ‘knobs’ within the system that can be used to make small adjustments specific to each individual chip on each wafer.


By constantly measuring the behavior of the lithography system, in-scanner metrology is used calculate and then coordinate the many tiny adjustments that need to be made by the physical components (the ‘knobs’) to optimize the pattern on every microchip.


Hundreds of sensors, including position, temperature, energy and motion sensors, measure every aspect within the system. Advanced algorithms are used to interpret these large volumes of data and coordinate the necessary tweaks in very minor but detailed ways, at the sub-nanometer scale, using thousands of actuators.

In-scanner metrology plays a particularly critical role in ensuring the quality of a certain type of memory chip, known as 3D NAND. These are the flash memory chips used in SD cards, solid state hard drives and smartphones. Previously made in 2D, the introduction of 3D technology was a game-changer for memory chips.


Stacking memory cells on top of each other greatly increases storage and enables the chips to run more efficiently and use less energy. But these chips are complex to make and a challenge to measure. 3D NAND chipmakers have to fabricate the intricate structures found on a 2D chip, and then line them up in the vertical plane, connecting them using tiny vertical channels.


Many metrology systems can’t penetrate these 3D structures to look inside the chip to detect fabrication issues, so production relies heavily on in-scanner metrology software to optimize quality. By analyzing the vast amount of data generated while layers are added in the lithography system, the software feeds this back to optimize alignment and overlay. 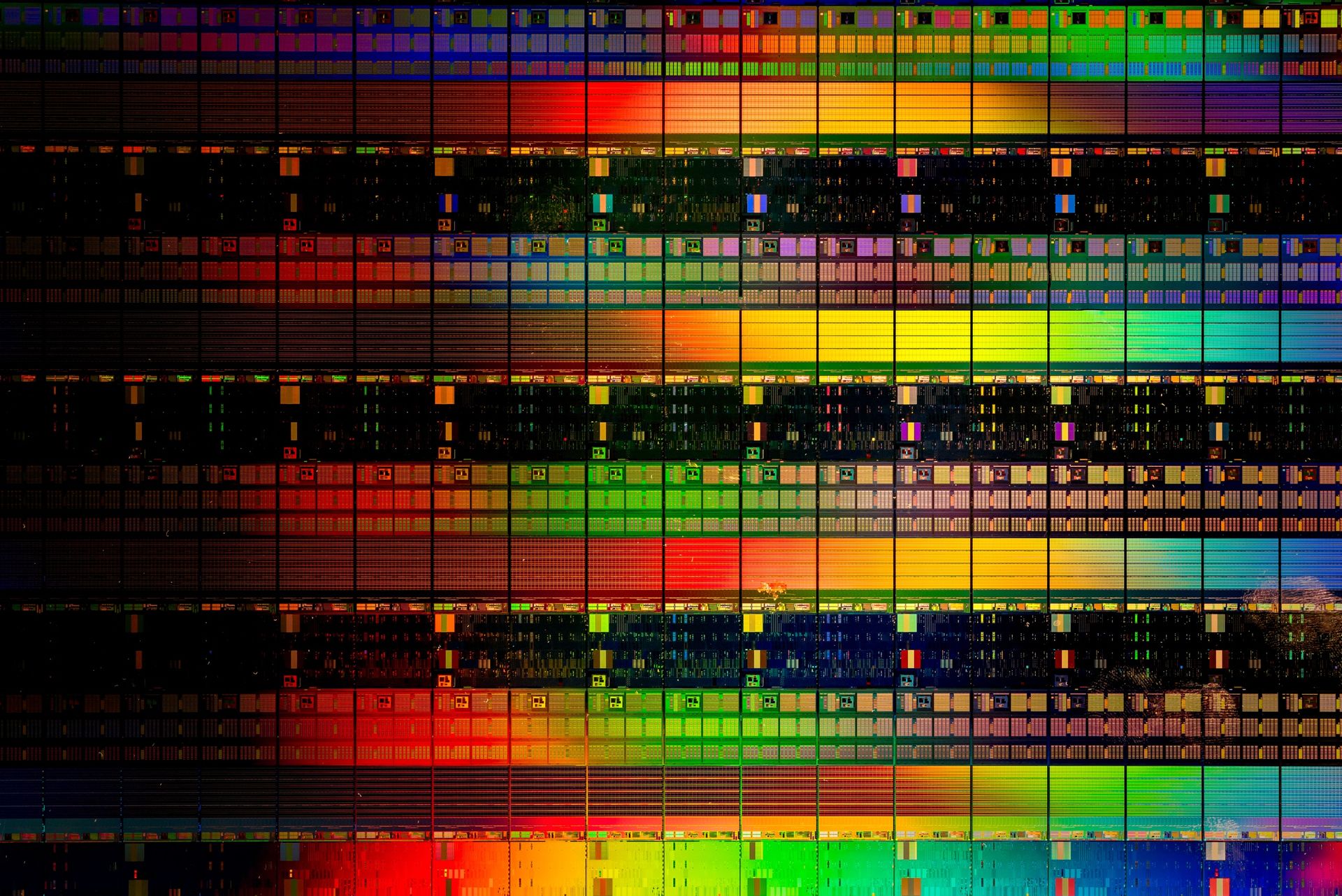 Pattern fidelity control (PFC) is a new paradigm in chip manufacturing, aiming to deliver the full benefits of our holistic lithography approach. By drawing and analyzing the most precise data from a wider range of sources throughout the entire chip development and manufacturing process, it gives chipmakers unprecedented insights into the patterns they are actually printing on wafers. Powerful algorithms then translate those insights into actions. These actions are implemented in the lithography system to prevent pattern defects and enable high yields, even when producing the most complex chips.

A single lithography system can generate up 31 terabytes of data per week from its sensors alone – that’s three times more than the Hubble Space Telescope gathers in a year.


The vision for PFC is to draw relevant data from wherever possible in the microchip development and production processes. To do that, we work together with other semiconductor equipment makers in the fab to bring the most benefit to chipmakers.


We gather and use data from systems including the YieldStar metrology systems, e-beam inspection tools and wafer mapping within our lithography systems. We also leverage information from our computational lithography solutions, as well as any non-ASML equipment on the production line. Finally, we are developing a range of pattern fidelity metrology options that harness the high resolution of e-beam measurements in ways that can be integrated into the production line.

Working with domain experts in specialist fields such as overlay performance or illumination configuration, the vast amount of data we collect is first manually pre-processed to remove any spurious relationships (where the domain experts see a correlation but know there is no causal relationship). That data is then analyzed with advanced computer models and machine learning algorithms to uncover interactions between the many factors that contribute to defects, affecting the performance of the finished microchip. Finally, we calculate suitable corrections, which are then applied in the lithography system. This will deliver the advanced control that manufacturers need for sub-10 nm features.

The science behind the chip 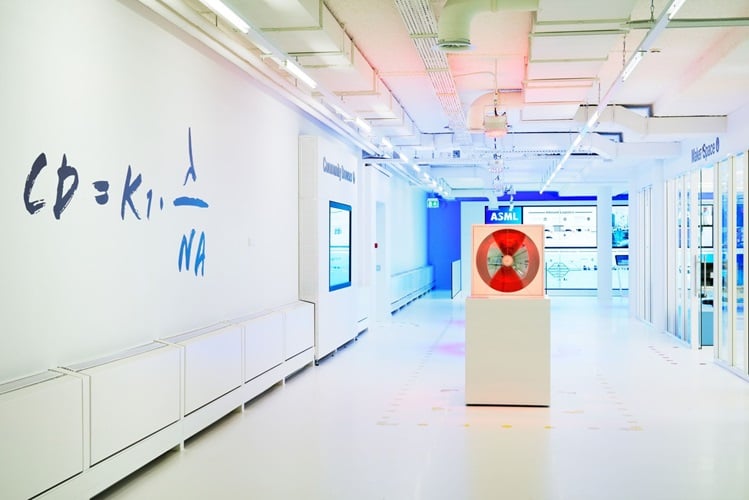 The equation that determines just how small the features on a microchip can be. 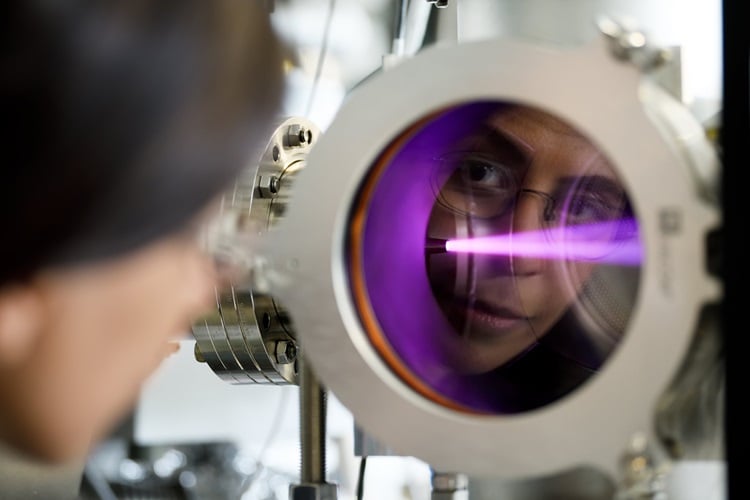 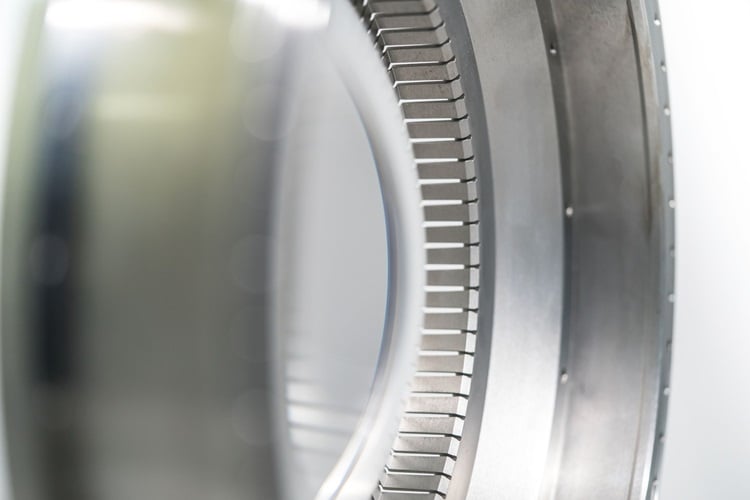 Learn about the role of lenses and mirrors in ASML’s lithography machines. 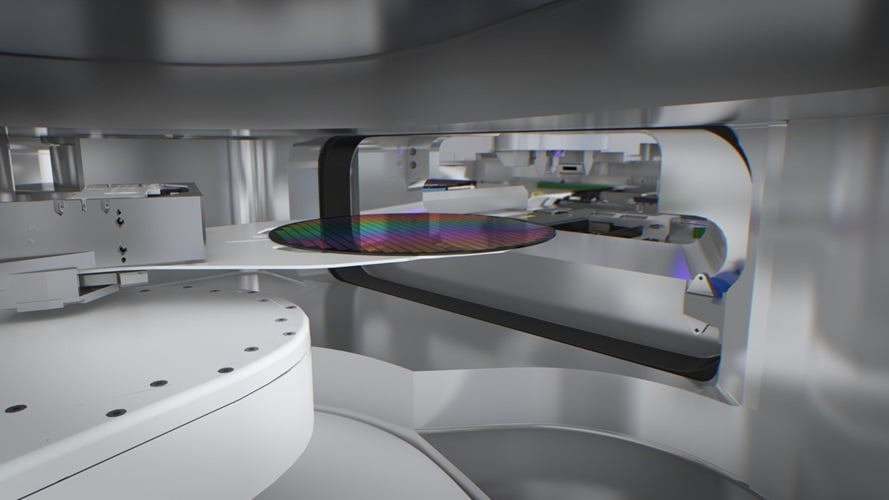 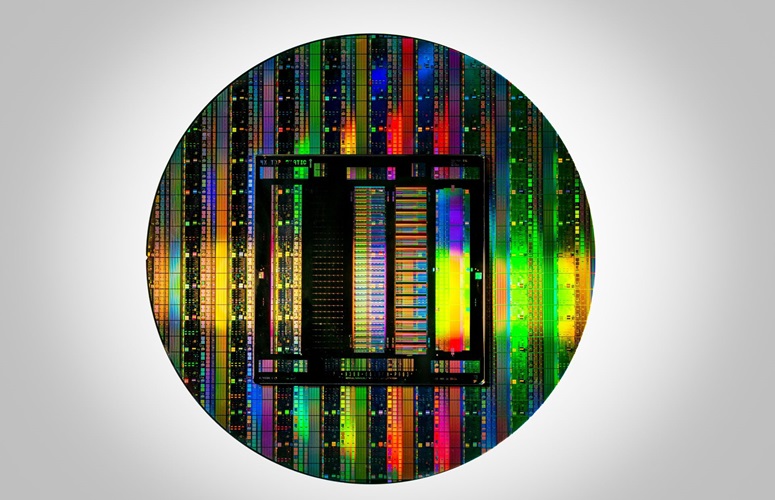 ASML is pushing fundamental physical concepts to their absolute limit. 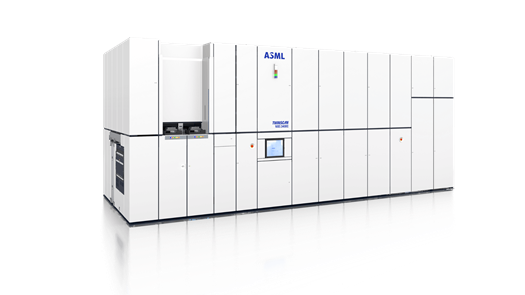 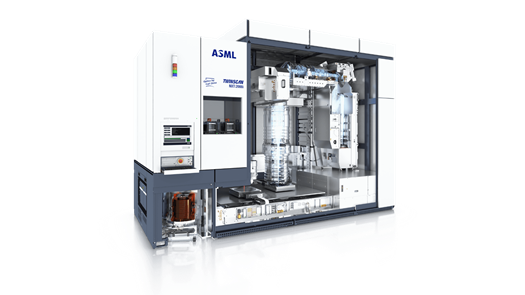 ASML's deep ultraviolet (DUV) lithography systems dive deep into the UV spectrum to print the tiny features that form the basis of the microchip. 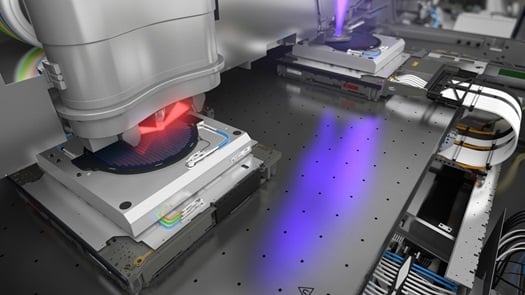 Delivering speed and accuracy, our metrology and inspection portfolio covers every step manufacturing processes, from R&D to mass production. 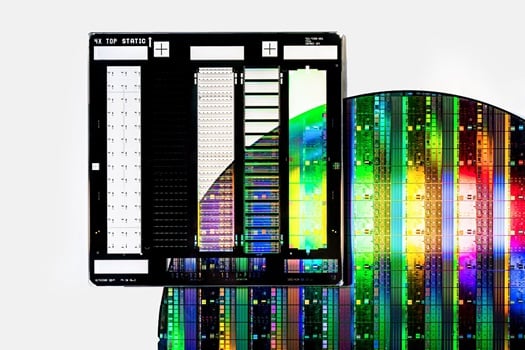