When COVID-19 threatened to shut down our annual Technology Conference, we took the event online. More than 16,000 attendees from 38 different countries joined the world’s largest fully virtual developer conference, hosted by ASML.

ASML’s executive vice president of Development & Engineering Herman Boom adjusts his microphone and takes a deep breath, waiting for his cue to begin speaking to an invisible live audience of thousands. The backdrop behind him looks more like a movie set than a developer conference: with a green screen and cameras on sliders, one would half expect to see a clapperboard appear before the camera lens. But there are no ‘second takes’ in this two-day live production.

We normally host our annual Technology Conference in ‘s-Hertogenbosch, the Netherlands, and in hubs in San Diego, Silicon Valley and Wilton, Connecticut, with over 7,000 people attending. This year, due to the COVID-19 pandemic, the entire event became one global virtual experience.

On the screens of thousands of attendees, the background behind Herman morphs into images of locations around the world. “Instead of you coming to the Technology Conference, we are coming to you,” he says. “We are all united in the same conference, while being in different places.”

With more than 16,000 employees and R&D partners tuning in virtually, what started out 20 years ago as a small knowledge-sharing event among engineers has now grown into the largest developer event worldwide. Anouk Donker, global channel manager and one of the moderators for the event, describes what an unexpected opportunity moving the conference online turned out to be.

“Normally, the invitation list has to be limited, but this year, for the first time, we were able to open the event up to the whole of ASML,” she says. 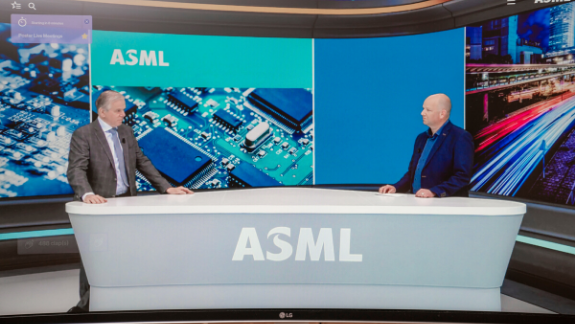 Virtual and augmented reality in an online event

Participants entered the event by clicking a link that directed them to a game-like virtual ‘conference center’ space with a main presentation stage at one end and a gateway to a poster ‘gallery’ at the other. Off to the sides were eight other presentation stages where experts presented their research and audience members could ask questions.

Cristina Petcu, a materials design engineer at ASML, was impressed. “When I joined the conference space online, I felt like I had stepped into a virtual world,” she says. “It was very well done.” 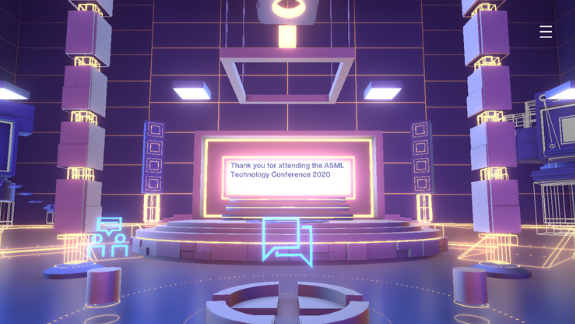 Inside the Technology Conference virtual environment.

“When I joined the conference space online, I felt like I had stepped into a virtual world,” she says. “It was very well done.”

Participants could choose to join more than 80 webinars on topics ranging from EUV and DUV lithography to metrology and inspection, software, data analytics and machine learning, and sustainability. More than 350 research posters detailing projects within the company were available for people to view and study. A jury voted on the posters, with the best candidates receiving awards for ‘best innovation’ and ‘best customer solution’ during a special ceremony.

Inside an AR broadcasting studio

Behind the scenes inside NEP’s production studio in Hilversum, the Netherlands, cameras move into position as employees in the control room orchestrate the process from behind rows of screens.

When first walking into the studio, Niek Verbeek, ASML’s director of Software Integration & Testing and one of the moderators for the event, says you could be “completely overwhelmed by the technology.”

“All the cameras and the sensors and the augmented reality being projected around you – if you’re into technology like I am, you feel like a kid in a candy store.”

To know more about how it all works – the ‘living’ background, the conference space, the poster gallery – Niek asked NEP’s CEO Ralf van Vegten in an interview after the conference.

“We use a green screen studio so that we can remove the background and replace it with a rendered image,” Ralf explains. “To make sure the images match up, our cameras need to know where they are in space.”

To accomplish this, NEP uses a tracking system that bounces infrared light off a network of reflective stickers on the ceiling. “It sends this 3D ‘XYZ’ data to a render engine together with information about the tilt and the roll of the camera, as well as zoom and focus data from the lens. All this data is combined to generate an image that exactly matches the position of the camera.” 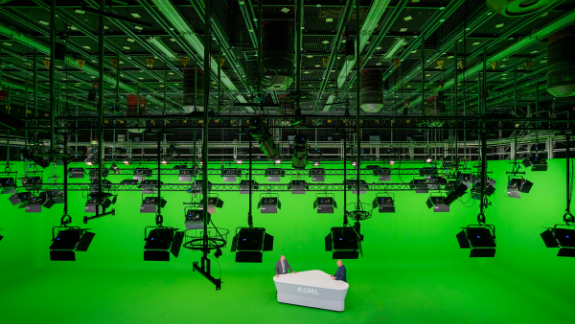 Data from tracking sensors is sent to a render engine, the name of which gamers will recognize as Unreal, used in the online game Fortnite.

The cameras in NEP’s studio are connected to huge data centers filled with broadcasting equipment. “The amount of data flowing through is massive,” says Ralf.

Ironically, this data processing wouldn’t be possible if it weren’t for ASML technology. Data centers use sophisticated chips produced by our customers on the latest-generation ASML lithography machines.

People often think the internet of things is driving the demand for more powerful chips, but this is only true indirectly. “The most advanced chips aren’t found in your smart fridge,” says Niek. “They’re found in the data centers that process the information from your fridge.”

It’s this ‘artificial intelligence of things’ that our chief technology officer Martin van den Brink credits with the continued persistence of Moore’s Law and the push for ever-more-powerful chips. “Moore's Law is alive and well – it has never been looking as bright as now. All the handheld devices and machinery around us are being connected through complex processes with AI. This will drive our industry for years to come.”

Dr Ho-Kyu Kang, head of the Samsung’s Semiconductor R&D Center, who took the stage to give a keynote speech during the event, agrees. “It’s not over yet,” he says. “The amount of data from connected devices is expected to quadruple in just five years’ time.” 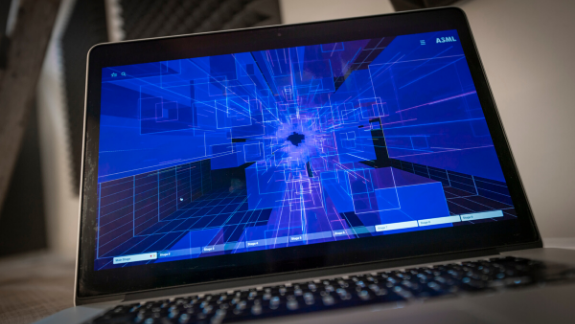 A computer screen entering the virtual environment of the ASML Technology Conference 2020.

“The amount of data from connected devices is expected to quadruple in just five years’ time.”

Dr Kang suggests that chip performance, power consumption, reliability and cost reduction are important elements that need to be considered in the future. For Kang, innovation in equipment, structure, materials and the integration process will open the door to a new exciting era.

Resilience in the face of COVID-19

While virtual meetings have now become part of our daily lives due to COVID-19, the Technology Conference took it a step further.

Earlier this year, augmented reality technology made it possible for ASML to help our customers remotely during the coronavirus. Using a Microsoft HoloLens, customer support engineers at our customer location were able to perform a service action with the help of R&D teams in Veldhoven, the Netherlands. AR’s increasing importance for ASML was reflected in the technology conference, which featured a number of talks and research posters on this topic.

Every year at the ASML Technology Conference, we recognize experts in our R&D department who have made outstanding contributions to our technology by awarding them with the title of ASML Fellow. This year we awarded Marco Wieland with the title of fellow. Marco is the co-founder and previous CTO of Mapper Lithography, whose assets ASML acquired in 2019.

“To continue advancing our technology, we need to embrace new ways of thinking and acting,” says Herman Boom. “We need people like you who dare to think differently – who can imagine seemingly impossible solutions and engineer them into reality.” 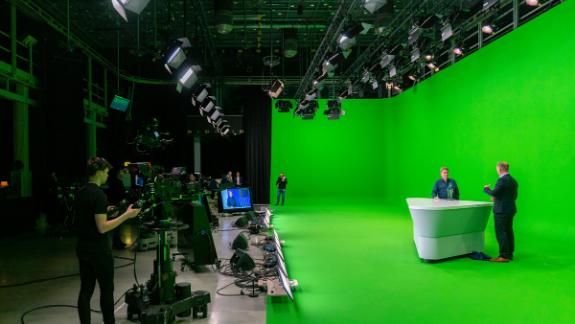 Connecting is important, even if it’s virtual

Despite the lack of face-to-face interaction and the lack of what one participant described as “that conference atmosphere,” attendees still felt connected and inspired, with some even saying they hope to see some virtual elements in future conferences.

“When I first heard that we would go fully virtual with the conference, I actually had my doubts,” admits Jos Benschop, ASML’s senior vice president of Technology. “But it was a spectacular success. It’s amazing how technology can connect the world.” 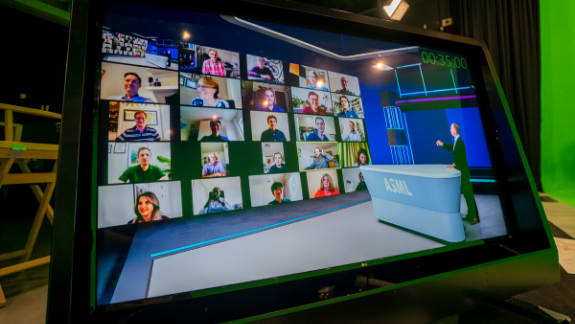 “It’s amazing how technology can connect the world.”

"Canceling the event was out of the question," says Herman Boom. "We don't know how long this pandemic is going to last, so we wanted to inspire our people and help them feel connected to each other, to ASML and to our customers."

“The disadvantage of a fully digital event is that it rules out the informal chats,” Jos Benschop continues. “But the tremendous advantage is that it breaks down geographical barriers. And, if you think about it, that is exactly the mission of Technology Conference. Given the difficult times the world is currently facing, sharing knowledge and connecting with each other has become more important than ever.” 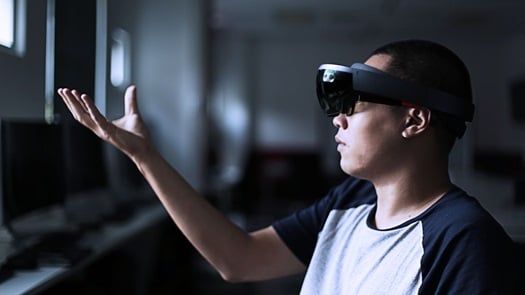 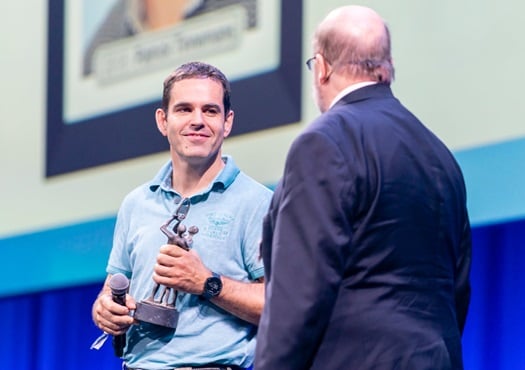 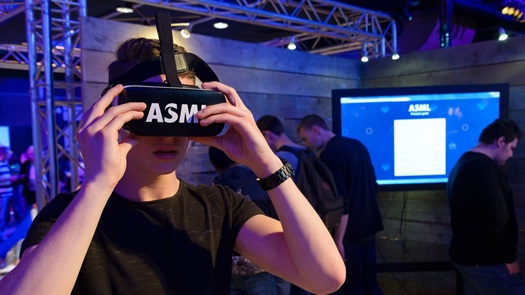