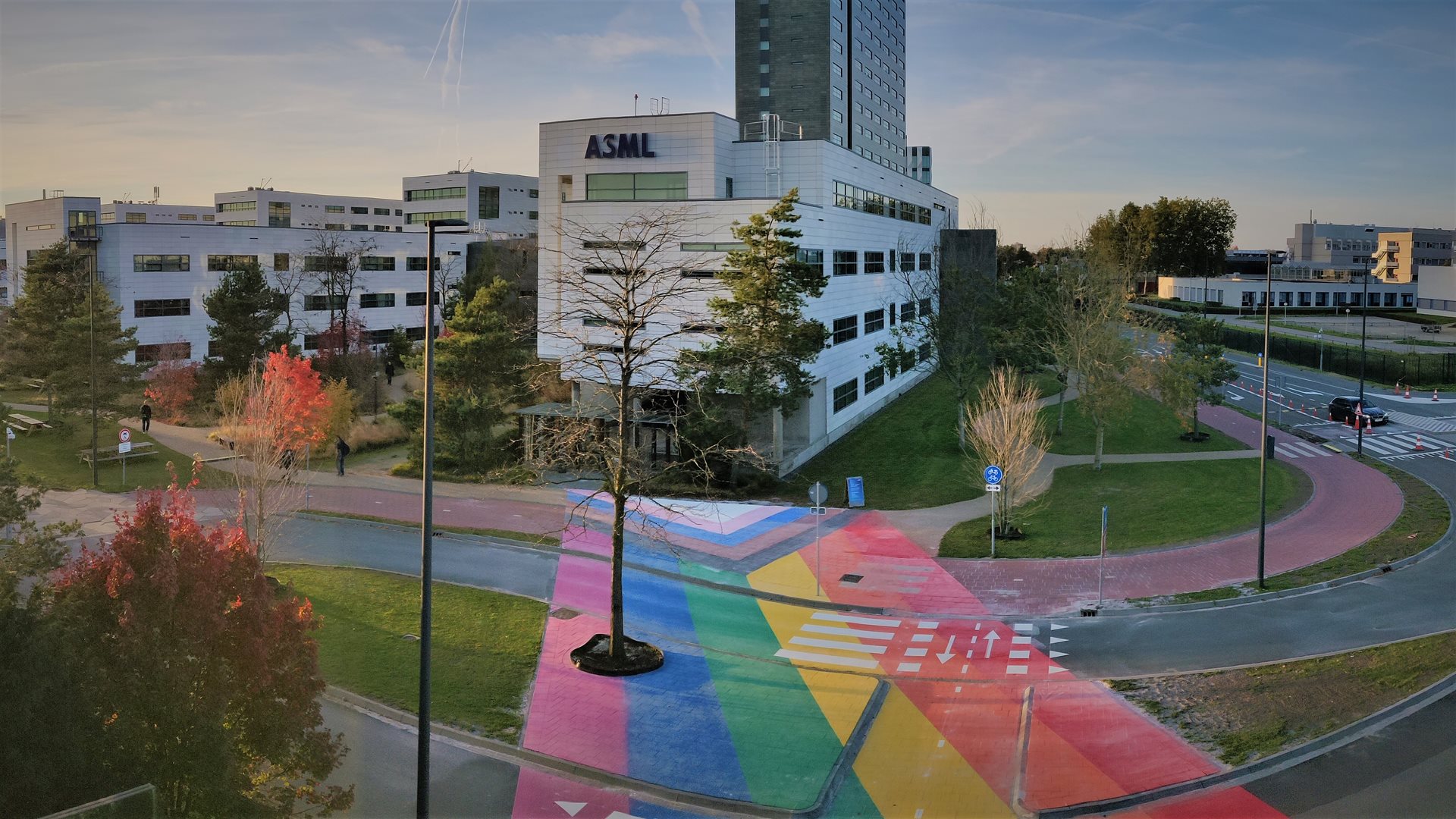 To be visible – that was the goal that a group of ASML employees in the LGBTI community set for themselves in 2014. It was the start of Pink ASML (now known as 'Proud'), a leading employee network within ASML. Co-founders Martijn van den Tillaart and Dulce Pumareja share how it all began.

The idea was born in ASML's cafeteria in Veldhoven, the Netherlands. It was 2014, and occasionally a group of colleagues from the LGBTI community would have lunch together. That year, a Pride Walk was taking place in Eindhoven. The group started to discuss whether any of them should take part and, if so, whether they should do so as an ASML delegation. One consequence would be that they would become visible as gay or lesbian within ASML. Everyone would know about their orientation.


"Yes, we need to do that!" was the group consensus. They'd taken their own public 'coming out' in stride, and now it was time to put ASML's LGBTI community on the map.

The Netherlands may be relatively progressive when it comes to LGBTI issues – for example, it was the first country to allow same-sex marriage – but LGBTI acceptance within large organizations in the Netherlands is still not a given. LGBTI employees who express their sexual orientation can never be sure how their colleagues and supervisors will react. Despite there being many large companies in the Eindhoven region, when the co-workers registered for the 2014 Pride Walk, they were the only participants representing a commercial organization.


Improving the visibility of LGBTI issues at work is not always easy, as the initiators of what would become Pink ASML know well. In 2014, ASML employed 14,000 people from many nationalities and cultural backgrounds – some with conservative attitudes towards LGBTI people. It can be difficult to talk openly about this topic.


Creating awareness around LGBTI at ASML

"But you can also look at it from a different angle," says Martijn van den Tillaart, a project leader for EUV system integration. "The fact that there are people with different backgrounds in the company means it's even more important for Pink ASML to show its colors." 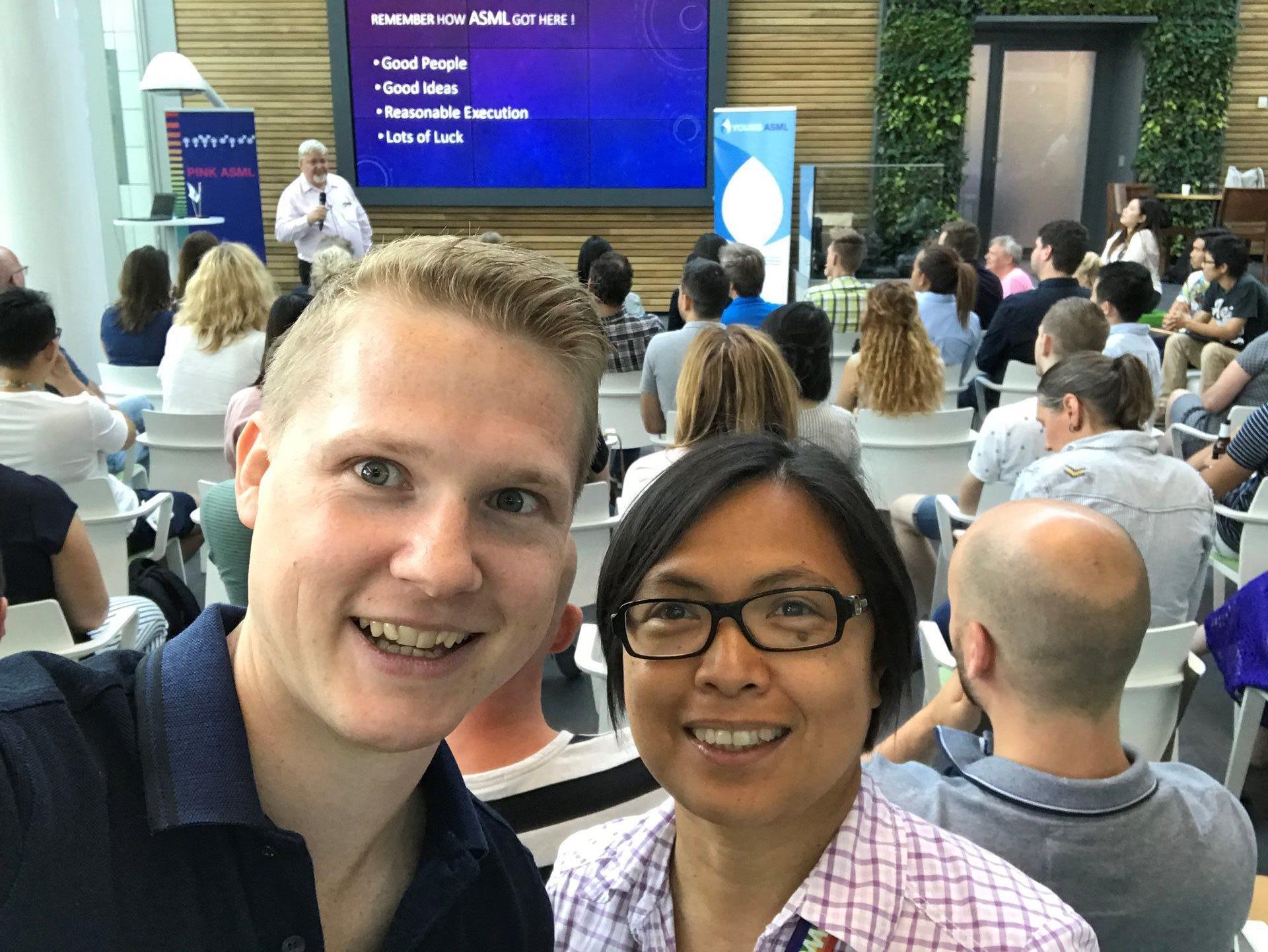 Colleagues Martijn van den Tillaart and Dulce Pumareja smile for a selfie during the pre-event for a recent Pride Parade.

Martijn was one member of the group who joined the Pride Walk and went on to set up Pink ASML. He was chairperson for the first five years.


"The most important thing is visibility."


But how do you set up an employee network? The colleagues were engineers, not activists. So the brand-new Pink ASML committee assigned different tasks to different people. Martijn contacted Workplace Pride, an international organization with a membership comprising large companies that supports LGBTI initiatives. Workplace Pride provided Martijn with tips to increase awareness of Pink ASML. One of the starting points was to hold lunches and social events to attract colleagues who were also members of the LGBTI community. Soon after, the committee began to organize annual activities as part of Coming Out Day. And a few years later, the group participated in Canal Pride in Amsterdam.


"The most important thing is visibility," says Martijn. "When our colleagues see that this group exists and that there are people who want to discuss the acceptance of their orientation or expression, it can also have a positive impact on their own situation and make it easier to raise the issue with their workmates."


Through Pink ASML, employees are also able to contact a confidential advisor from the LGBTI community for support or advice.


The committee soon realized that their employer had a positive attitude towards Pink ASML, and not just because inclusiveness is a core value of ASML. ASML is growing rapidly, and recruiting talent is one of the biggest challenges it faces. Candidates who are trying to find out more about the company and its inclusiveness can read about Pink ASML in the Life at ASML section of asml.com.

"A Mexican man joined ASML and moved to the Netherlands with his boyfriend after seeing that one of the members of the Board of Management was on our boat during Canal Pride," shares Martijn (watch this video to see what they saw!). "There are many examples of such situations."


Being vulnerable, being a leader

Martijn has a technical degree, but he needed to learn new skills to fulfill his Pink ASML leadership role.


"I found that I had to spend much more time convincing others than I expected. To me, launching Pink ASML was a logical step because I knew how important it was. So other people would understand that too, right? But what makes sense to me is not necessarily everyone else's logical view. Time and again we had to put our arguments on the table."

An additional obstacle to winning over colleagues and members of the executive team was that Pink ASML committee members had to first expose themselves, making them vulnerable on a very personal level.


"Whenever Pink ASML comes up, the fact that we, as a committee, are members of the LGBTI community is an implicit discussion topic. We had all come out of the closet before, but it felt like we had to do it again and again." Only by putting themselves in a vulnerable position could the committee create a space for others to do the same.


Pink ASML was soon well known within the company. A similar group was set up at ASML's US offices, with the guidance of the committee in Veldhoven. Although his manager allowed him to do some of the work for Pink ASML during working hours, Martijn has also put a lot of his own time into it. As a member of Workplace Pride, Martijn initiated [email protected], a series of conferences on diversity and inclusiveness in Dutch cities with a large technical workforce and student population, such as Enschede, Groningen and Delft.


"We had all come out of the closet before, but it felt like we had to do it again and again."


Finding the time to organize activities, in addition to the group's busy jobs, can be tough. Martijn has a "reasonably black-and-white" view of being part of this network, as he says. "You're either involved and you help out, or you just come along to the events. But you can't volunteer and do nothing. You can only build something if you're willing to put your back into it, together."

To celebrate the fifth birthday of Pink ASML, the group threw a party. They expected a modest turnout but, in fact, hundreds of people came. Shortly after, Martijn decided it was time to step down from the committee.

Martijn's role transferred to Dulce Pumareja, who is currently brand manager of the committee and a product owner at ASML. Like Martijn, she's one of the original founders of Pink ASML.


For the first few years, Dulce mainly carried out organizational work for Pink ASML. When the idea came up during a committee meeting to set up a physical (and symbolic) closet at ASML, Dulce jumped on it. She found a secondhand closet and had it painted half ASML blue and half pink. On Coming Out Day every year, the closet is used by colleagues to act as an easier and more lighthearted way to 'come out' to their co-workers.


"Your self-expression is important. It's who you are."


What Dulce learned through Pink ASML is her ability to mobilize people across the company and ask for help. 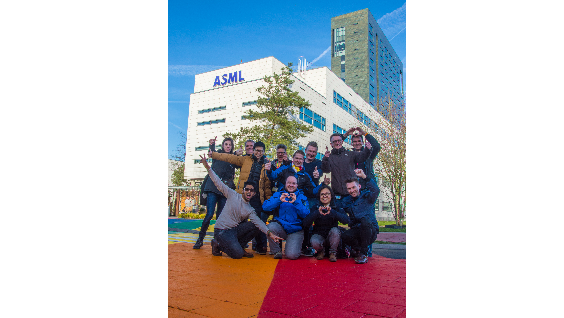 Members of Proud including Dulce (bottom row, second from right) pose on the rainbow crossing at ASML's Veldhoven campus.

"The most important thing is that it comes from within," Dulce explains. "When you do something you believe in, others recognize that. If they realize that it's a good thing you stand for, they're much more likely to support it. In addition, of course, you just shouldn't be afraid to ask for what you need." It feels good to be able to help others, says Dulce. "Your self-expression is important. It's who you are. That is why it is so essential that you can express it at work."


She is proud of the rainbow zebra crossing that was laid on the ASML campus in Veldhoven on the initiative of Pink ASML. These types of zebra crossings have also been created on ASML campuses in the US.


"Our colleagues use the zebra crossing on their way to work every morning. It is, in the most literal sense, making Pink ASML visible." 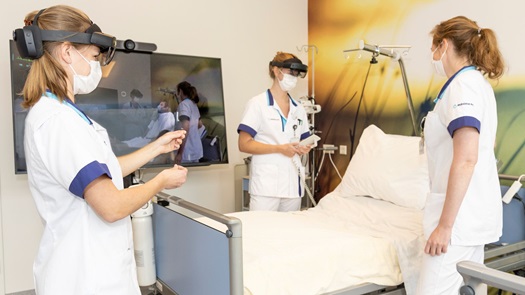 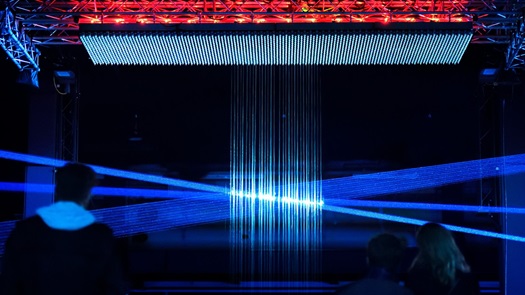 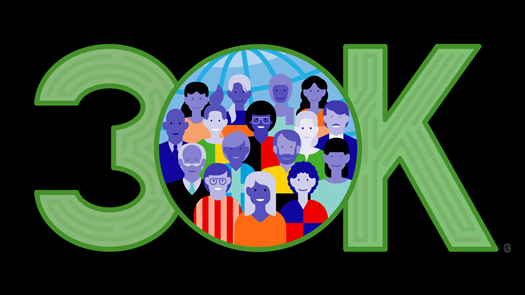