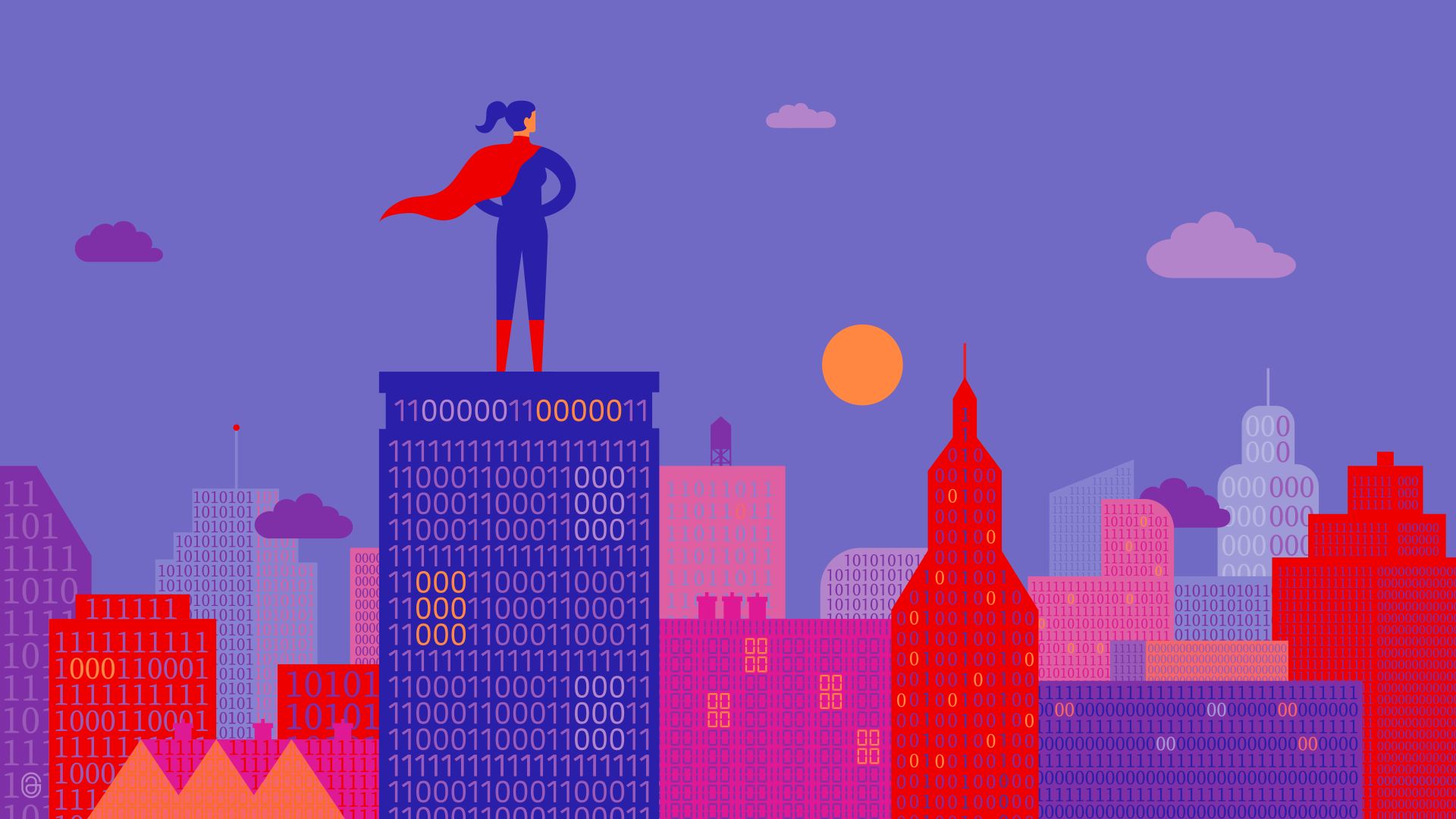 Leading the way for women in ICT at ASML

Technology is a field traditionally dominated by men, which means that there are plenty of opportunities for women and gender-diverse people to add valuable new perspectives. In honor of International Girls in ICT (information and communications technology) Day, celebrated each year on the fourth Thursday of April, we’re taking a look at how some of ASML’s software heroines are leading the way.

Wei Li, Melis Ozgur Cetinkaya and Mingjing Zhao work as managers in software at ASML. They each have at least a master’s degree (Wei has a PhD) and years of experience in their fields.

What has made these women successful is the fact that they have pursued what they love. “I was always drawn to STEM fields,” says Melis Ozgur Cetinkaya, a software architect leading a team of 15 people in smart diagnostics at our headquarters in Veldhoven, the Netherlands. Originally from Turkey, Melis explains that “As a child, I was curious about how things work, the philosophy and motivation behind things and concepts.” Her interest in computer science was sparked at age eight, when her brother showed her how to right-click to view a web page’s HTML source code (read Melis’s story). 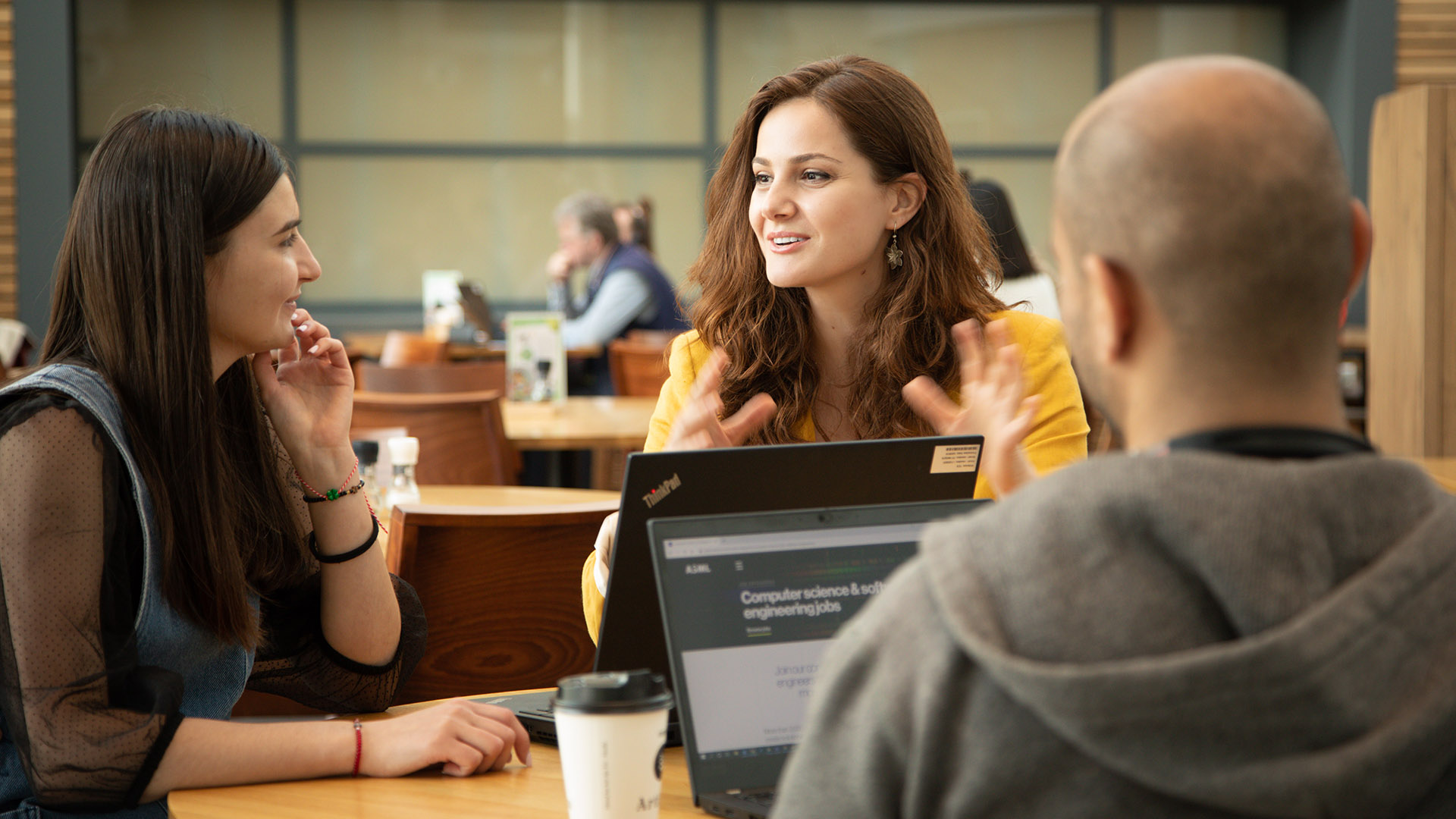 Wei Li, vice president of Software D&E (Development & Engineering), oversees TWINSCAN and system software development. She ended up in software and computer science after studying both electrical engineering and biophysics. “I used computers to do simulations in biophysics, and I really felt that my passion was on the simulation side,” she explains. Originally from China, Wei completed a dual degree from Louisiana State University (a PhD in physics and a master’s degree in computer science).

Mingjing Zhao works as a senior software quality assurance manager at ASML in Silicon Valley. She is able to combine her background in computer science and optical engineering in ASML’s application software, which helps customers to optimize production. A self-described ‘perfectionist’, Mingjing says she gets excited when she finds a bug, because that means one less for the customer to find. “Even a few bugs in our software could cause our customers to lose money if production is brought to a halt because of them,” she explains, “so I feel proud if I can find an issue.”

The ‘odd one out’

It’s not always easy being a minority in your field. In Wei Li’s first job as a software engineer in a Bay-Area big data startup company, she was one of around five women (out of around 50 employees). “Most of my colleagues were from India, so I was in the minority as a Chinese American, as a PhD graduate, and as a woman,” she recalls. Wei brought a unique way of dealing with challenges and a broader view of the software life cycle, which made her stand out, gradually growing from an engineer to a software manager.

Another female manager at ASML, Laura Angell (people manager for the Quality and Continuous Improvement team in San Diego R&D) told Fairygodboss, “I have spent years of my career being the only woman on the team, the only woman in the meeting and often not interacting with any women in any professional capacity.” She says that “The most challenging part of being a woman engineer has always been feeling like I don’t necessarily belong.”


But as Melis reminds us, “I think we have to remember that it’s not easy for anyone – male, female or otherwise – to be recognized as a leader in a technical field. You have to work and ‘own’ your story – learn from your failures, see the opportunities to grow and celebrate your success.” 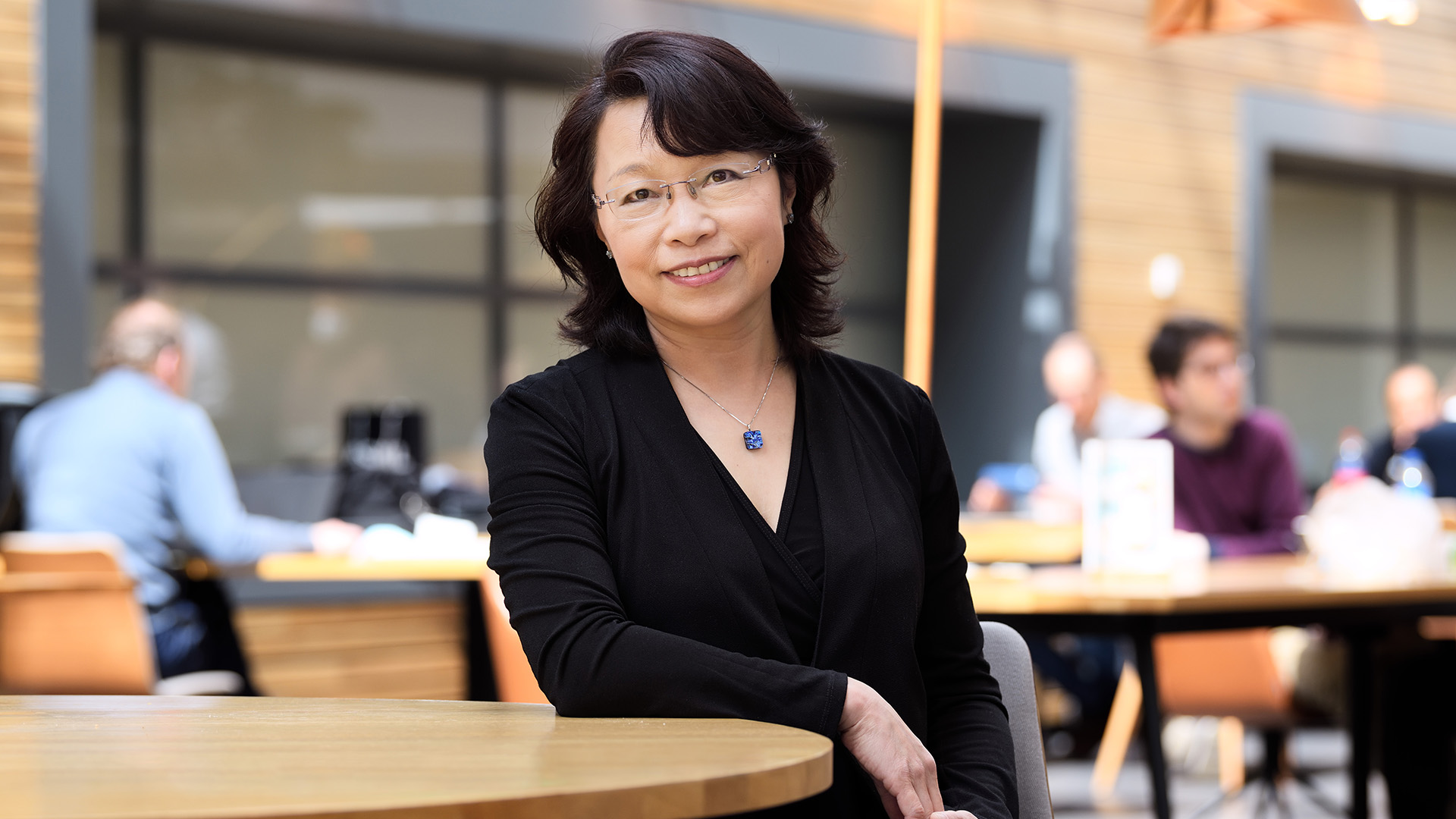 In terms of numbers of women, software is actually leading the way at ASML. “The percentage of women working in software is higher than in hardware,” says Wei. Mingjing can attest to this trend: “The software quality team where I work is about 50% women,” she says.

ASML has recently set gender diversity hiring targets and goals for the representation of women in leadership (read about these in our 2021 annual report). In 2021, female employees made up 18% of our workforce (up from 17% in 2020), and our goal is to increase this to 23% by 2024. Women in senior leadership levels is currently at 8%, and we aim to increase this to 12% by 2024. “Our expectation is to meet and even exceed these goals,” says ASML chief diversity officer Lee Wills.

Wei Li reminds us, however, that it’s not about targets for targets’ sake. “I would not like to think that I'm in my position at ASML because I'm a woman,” she says. “I got to this level because of my capability, and I want people to be able to recognize that.”

ASML believes that the key to hiring more women is to promote STEM education within the future female talent pool. We support projects through the ASML Foundation and our community engagement education efforts in which we share our enthusiasm for science and technology with the younger generation, especially young girls.

In any company, creating an inclusive environment where employees are valued for being who they are is paramount to promoting gender diversity.

“Men and women are different – you have to admit it,” says Wei Li. “And I like the fact that they’re different. My approach is to embrace these differences; don’t fight against them.”

According to Lee Wills, “Diversity is a fact – it’s what makes each of us unique. But inclusion is a verb – it’s the everyday actions in how we work together as a team, creating a sense of belonging and working toward a shared purpose. Diversity and inclusion enhance our ability to innovate, to be creative and to problem solve.” 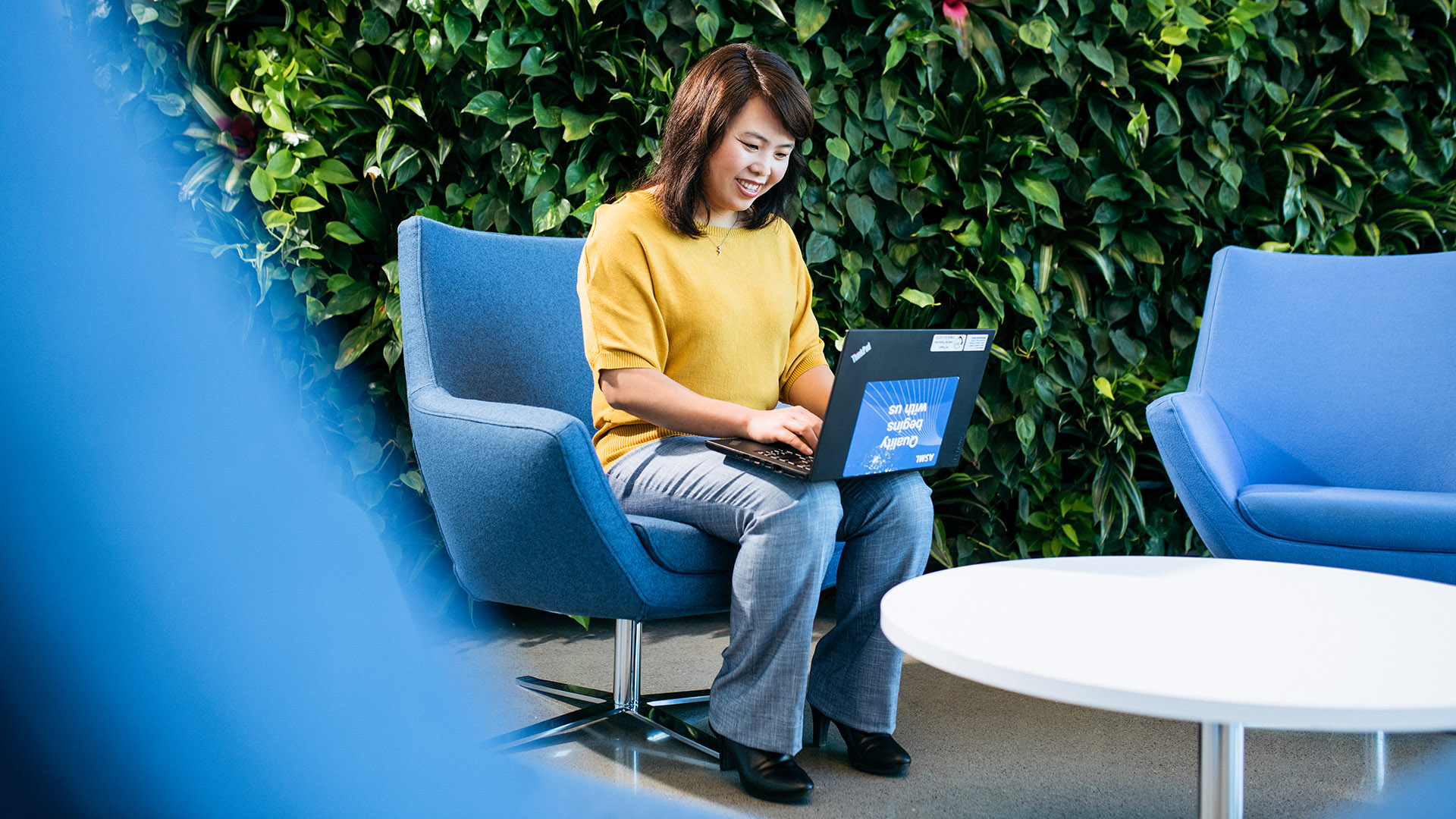 “I think the balance among ASML’s core values of challenge, collaborate and care helps to create the kind of working environment we all want to be a part of,” says Melis. “These values are aligned with my own personal understanding of how you should connect with others and try to solve technical problems.”

Mingjing notes that in her software teams, diversity is viewed as a necessity. “Even if different people do the same test for the same feature in the software, they can find different things, because they have a different approach and a different way of thinking,” she says. “We have colleagues from many different backgrounds. Sometimes different personalities fall out with each other, but I think that's a good thing – that’s how we get new ideas.”

As a minority, having an ally in the workplace can help a lot. At ASML, all employees are invited to join employee networks such as Women in the Netherlands and WAVES (Women of Action and Vocational Excellence) in San Diego.

According to Michaela Landry, chair of Women, the network’s goal is to “create a network of women and allies at ASML that work together to drive an inclusive environment bottom up and top down.” Similarly, WAVES has created a campaign to promote camaraderie among employees in the US, with a focus on actions and initiatives in support of women at ASML.

Becoming your own heroine

Wei Li advises women to speak up in order to be recognized and heard. “You have to find a way to express your opinion and demonstrate your capabilities. Learn how to express your thinking, dare to make impact and prepare yourself for opportunities to contribute more. Don’t hesitate to ‘show off’ what you’ve done and celebrate that.”

Melis echoes this idea. “Be proud of who you are and what you achieve,” she says. “I would love to have more female colleagues,” she continues, “so this is my message to encourage women and girls considering a career in software or STEM: Go for it!” Mingjing adds: “If you are passionate about something, just try it out until you find a job you really enjoy.”

Melis concludes: “If I could go back in time to meet the five-year-old version of myself, I would tell her what I would tell any young girl (or boy) now: “Never doubt yourself – you are the hero in your story, and you can achieve anything.” 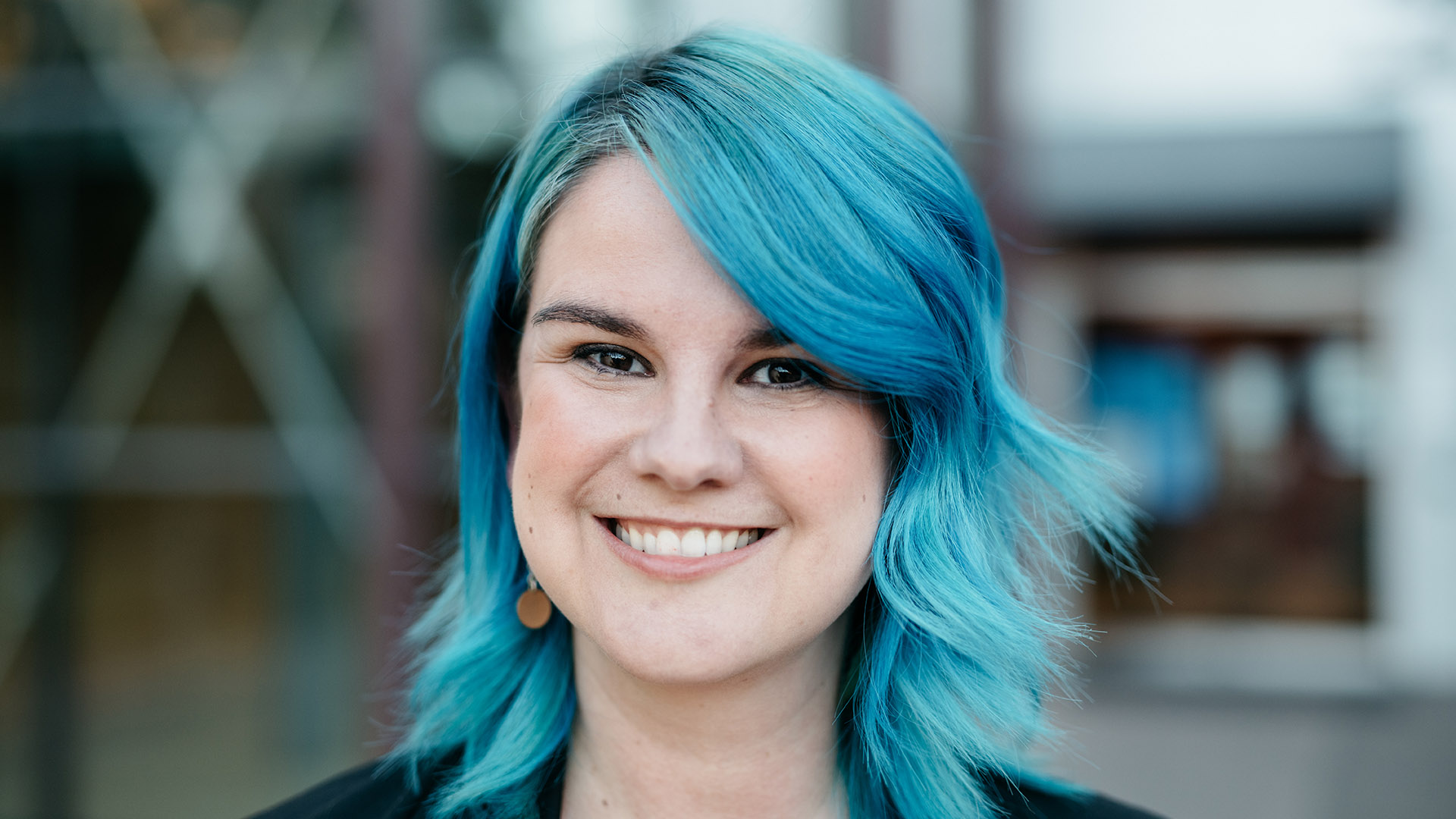 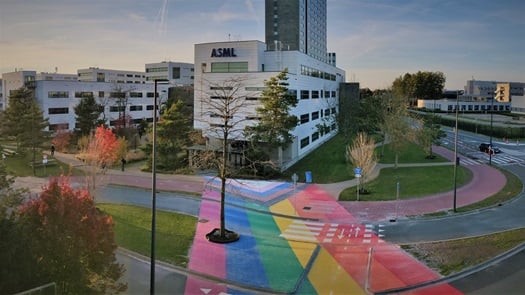 Aligning lithography to the nanometer